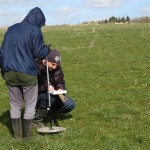 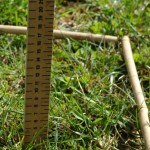 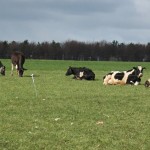 Summary of final report:
The aim of this case study was to determine the effect of mob grazing on soil organic matter under diverse swards and assess the performance of dairy cows in terms of energy utilisation and milk production. Mob grazing is a livestock management grazing strategy that is characterized by high stocking densities of livestock which are moved frequently from paddock to paddock with the aid of electric fences, trampling forage into the soil as they graze. The pasture land is then left, ungrazed until it is fully recovered, allowing the whole host of plant species to establish in the sward. In this respect, mob grazing tries to simulate the grazing behaviour of vast herds of wild herbivores found on the American plains, or in the African savannah.

There is a growing notion that trampling of significant quantities of forage onto the soil surface provides a better environment for microorganisms and other soil life and increases the soil organic matter. In addition, as this grazing system allows the plants to grow taller, the formation of large, complex and deep root systems leave high amounts of organic matter in the soil when they die off. Mob grazing is usually applied in diverse swards as these leys are postulated to promote microbial activity resulting in increased soil carbon levels and building humus. The claimed benefits of mob grazing on soil organic matter have not been studied in scientifically robust experiments/studies and this gap in scientific knowledge is reflected in the literature.

A 220 ha mixed dairy / arable farm located at Gloucestershire, UK was used a case study. The farmer introduced a mob grazing approach on diverse swards with the aim of increasing soil organic matter. Preliminary assessments on pasture composition and productivity were carried out in 2013 while systematic data collection on pasture and animal performance in addition to pasture productivity were collected from April to September 2014. In addition soil samples were collected in 2015 from three different fields and compared to earlier results from 2007 or 2012.

This study shows that soil improvement management through rotational high stocking grazing of bio-diverse pastures has a remarkable effect on the build-up of the soil organic matter; while microbial activity in the soil is moderate this can be improved by bio-treatment of slurry or farmyard manure. An average 21-day grazing rotation was applied on the farm during 2014 which is regarded as rather a short period to allow plants to grow to the desired height that fulfils the expectations of mob grazing. Nevertheless the results show that bio-diverse pastures serve as a viable alternative to conventional pastures (i.e. grass / clover pastures) as they can maintain animal productivity at high levels.

[1] Savory, A., 2013.  Response to request for information on the “science” and “methodology” underpinning Holistic Management and holistic planned grazing. Updated March 6, 2013. http://www.savoryinstitute.com/wp-content/uploads/2013/03/Science-Methodology-Holistic-Mgt_Update_March.pdf