A study conducted by breeding experts within the SOLID project has identified a number of genotypes as specificly suited for organic and low-input  dairy systems.  In the study, these genotypes are compared with conventional breeds.

Conventional dairy cow types have been bred by selecting primarily for milk production within high concentrate input systems. In these systems forages, especially pasture, typically account for less than 50 % of the total ration. Therefore dairy cows arising from these breeding programmes are often perceived unsuitable for organic and low input milk production systems.

While farmers have identified a number of breeds and strains as being ‘adapted’ to low input systems, there is little scientific evidence to prove that these breeds are more appropriate than conventional genotypes. However, it is well known that cows used within any production system need to be suitable for that system in order to realise their full potential.

SOLID-Task 2.2 seeks to improve the competitiveness of organic and low input dairy production by understanding how contrasting genotypes adapt to a systematic restriction of nutrient and energy supply.

Consequently, a number of genotypes identified as being adapted to organic and low input systems by producers were compared with conventional breeds in studies undertaken in Austria, Finland and Northern Ireland.

To understand how contrasting genotypes adapt to a systematic restriction in nutrient and energy supply, three experiments (each of a 2 x 2 factorial design) were conducted: Factors comprised two diet types (normal (i.e. system-specific) levels or reduced quantities of energy and nutrients) to two cow genotypes (“conventional” versus “adapted”). The adapted dairy cow types represented different approaches to breeding for adaption:

Adaptation through selection for lifetime performance: a strain of Holstein cattle selected on low input farms for lifetime performance for more than 50 years (HFL) was compared with conventional Brown Swiss cattle (BS) in an organic, low-input milk production system within an alpine environment in Austria. Data from 30 and 21 lactations were included in the study for HFL and BS, respectively.

Adaptation through selection for fertility and health traits: 16 Nordic Red (Finnish Ayrshire) cows, which had been selected within a controlled multi-trait selection programme for over 30 years were compared with 32 conventional Holstein cows in a Finnish milk production system. 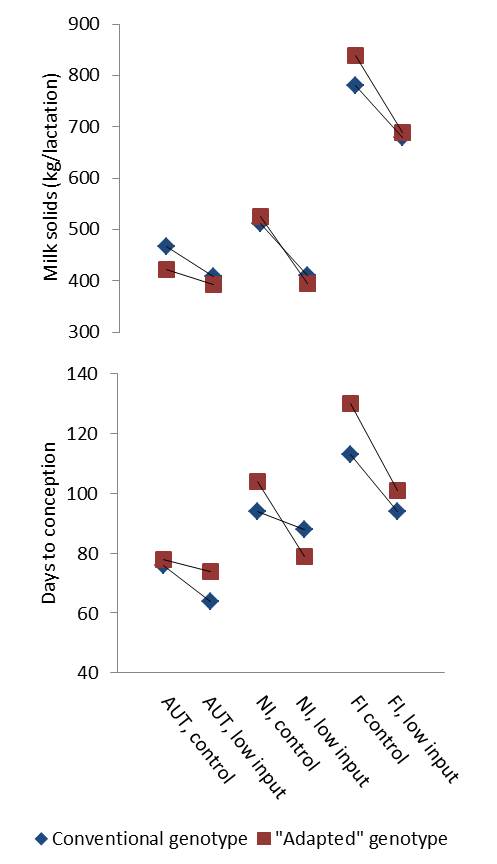 The experiments were completed in spring 2014 and the data are currently being analysed. Concentrate levels of the control and low input groups were 656 vs. 286 kg in Austria, 1657 vs. 717 kg in Northern Ireland and 2880 vs. 1359 kg in Finland. The preliminary data (only arithmetic means are presented) appear to confirm that a reduction in concentrate supplementation reduces milk solid yield, but does not have a detrimental effect on health and reproductive traits. The response of different genotypes to reduced nutrient and energy intakes were not consistent across the different studies. This is likely due to varying degrees of differences between both the genotypes studied and the feeding regimes implemented.

A detailed statistical analysis of the data is currently being undertaken in each country. This will also include an examination of the blood and milk, in order to investigate metabolic response patterns. Furthermore a common dataset to permit an across-country analysis including several biomarkers is currently being prepared.