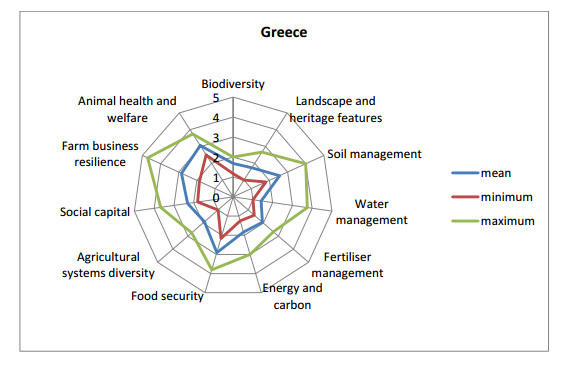 Biodiversity
The maximum, minimum and average values for “Biodiversity” were relatively low. Farmers, generally, did not seem very interested in taking measures towards the preservation of biodiversity in their farms. Nevertheless, there was diversity in the ecosystems which goats encountered during grazing which the tool did not identify. All the farmers were unaware of the red species list, with the exception of some endangered species of mammals. However, it was very interesting to notice that the majority of them knew in detail the flora and fauna of the pastureland used for grazing by their flocks. Furthermore, field boundaries such as hedges, which increase landscape and biodiversity scores in the assessment, were not common on the farms.

Landscape anf heritage features
The farms in general adapted to the natural area but rarely there were any environmental restrictions. Even if there were few historic features in some of the farms, the farmers were not taking any particular actions for their conservation.

Water Management
Water Management showed low scores across farms with one exception. This was possibly associated with the rather extensive management scheme linked to low investments in facilities supporting the efficient management of water resources. Interestingly, although the lack of sufficient water resources during grazing was commonly observed, the importance of ad libitum fresh sufficient water was in some cases underestimated.

Soil Management
A soil analysis was not undertaken at the fields as a standard procedure in the majority of the farms, although some of the farmers recognized the value of this practice. Grazing of goats during winter throughout the day did not seem to be associated with significant damage on the soil. Practically, in the surveyed farms, soils were not affected by erosion and leaching of nutrients which explain the reason why no measures are taken to reduce the risk of erosion.

Fertiliser management
In many farms no artificial fertiliser was applied and the level of nutrient application needed for the crops was not determined by monitoring the level of major nutrients in the soil. Also, in some cases, due to the extensive management scheme, the produced manure was not possible to collect.

Food Security
Greek farms were scored high in this spur. Most of them were selling their milk to local dairy industries for the production of dairy products for the local market. Meat production was considered as a by-product of milk production.

Agricultural System Diversity
The total of the farms were milk producing farms. Also, most of them were single-species farms rearing dairy goats and only few of them reared some dairy sheep, mainly under the extensive and the semi-extensive systems. Only one of the farms was fully integrated and produced pasteurized milk and cheeses.

Farm business resilience
Only some of the scheduled investments have been carried out in most of the farms. Farms expected to still be farmed for the next ten years, had plans of further development. A restriction both on the flexibility in the choice of inputs and outputs and on the capabilities to pick up and apply new technologies was reported by the majority of the farmers. The results of benchmarking were not used for the better planning of farm’s management.

Animal Health and Welfare
An insufficient health plan which has been drawn up once and not reviewed regularly was reported in most of the farms. It included some strategies for maintaining good health and for the prevention of the diseases, but did not include any updated information regarding management, feeding and monitoring strategies. In general, lameness and mastitis incidence can be considered as low in the surveyed farms. Generally, the high score attributed to Animal Health and Welfare spur in the RAT diagram is associated with the ability of goats to perform natural behavior and grazing throughout the year with the exception of some days with adverse weather conditions.

Social capital
None of the farmers practiced agrotourism and although many of them maintained areas of public access, they did not promote such practice. Also, the majority of farms did not use any strategies for the communication of the products produced.